Today is 1 July! Happy July everyone! Glad I lived to now! For a while back then... I was concerned if Aug 13 might just be too far away for me...

1) Waiting for Lee Min Ho's new series coming out in Aug 13. Called "Faith". Looking forward to seeing him in period costume playing a general with his cool face, particularly a shot of him looking very pale and evil. 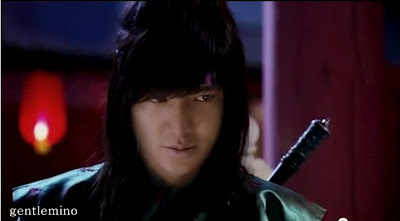 2) Last night, tried for the first time, CocoIchibanya@ Bugis+ formerly known as Iluma. Don't know why they have to change the name so that now have to put the more lengthy "formerly known as". Iluma was fine. Bugis+ is so nothing. But name doesn't matter if numbers are to go by--last night plenty crowded, thanks to the linkway from Bugis. Mainly queues for food.

3) Just ordered from Vitacost again. Waiting for order to be shipped via UPS. Will need to do a post on this. Been wanting to since the first time, but didn't. This is my 4th order with them.

5) Got my hands on The Third Gate by Lincoln Child. Just issued hot and fresh off the National Library! I'm the first because reserved it even before it reached the shelves!! I learnt of its release by e-mail from the author who said it's out. So, I wondered if our dear library had it and viola, the computer system acknowledged that they had but not yet ready for loan. In the past, reservation wouldn't have been possible until After the book has been released to the shelves. But for a while now, it's been possible to reserve books even before they touch the shelves (as long the system shows the branches and says "in process").

Bro: What you need is money. Then you can buy a handsome guy.

If I didn't flip the switch to moderate comments, my blog will be filled with a lot of crap comments. Don't expect any brains in Singapore. Moderated means comments can only be published after approval. It also means I don't have to read the comments (conveniently located in the social section of my mailbox) nor care about lousy comments being posted. In the beginning, I made the mistake of being generous in freely allowing all sorts of people to comment & I didn't have time to monitor. When I devoted time to it... Reading the comments was like having to look at shit. *grimace*My advice to bloggers: Out of 10 comments, only maybe 1 will be constructive or positive. For that 1, you have grimace at 9 other comments by stupid people. Not worth it. Save yourself the trouble. Have a nice day by using that fabulous moderation button. Disable every blog post comments section. OR let the comments just pile up if you are moderating. What you want are views and viewership (good if you are running affiliate ads). ----------------------------------
For a fact, there is no god. But there are spirits capitalizing on humans who believe in gods. Whatever you ask for, you will get but it's not free. You think giving flowers or money in exchange is enough but it's not. You won't know what they want beforehand until it's too late. And these spirits are patient. Years to them is nothing. They can wait for payment. Christian god, whatever god, it's the same.

Hakkenden Season 2. Wooo!! Super Kakoi (cool)!! Love Genpachi Inukai. Soo handsome and SExyyyy!!! The most handsome, followed by Sousuke. Surprisingly, the supposed to be beautiful Keno is not attractive at all (loses to another character in an an old anime called Arslan, to whom Keno looks a lot like). Season 2 is on every Sunday Japan time. *sighs* Need to wait every Monday to wait for the Eng subs. I love Satomi Rio's voice!! So Sexyyyy!!!
------
Brothers Conflict. Very sexy 13 brothers. I want all of them. No, actually, just Kaname the monk! ^__^ What's he doing being a monk if he likes women? Be a doctor. That way he can get to touch them. I love his voice. Junichi Suwabe. The voice of Frau in 07 Ghost and Undertaker in Black Butler!! Never thought he's the notty sexy high-pitched voice as Undertaker.

Another voice that's undergone unrecognizable change is the squirrel aka Satomi Rio in Hakkenden voiced by Hiroshi Kamiya. I can't believe he's the voice of Juli the squirrel. Such a sexy, cool voice of Rio Satomi becoming the squeaks and screams of a squirrel. Ohhh... what a pity!

Update some mins later: I just watched a Youtube chat between Junichi Suwabe and Hiroshi Kamiya. Turns out Hiroshi's natural voice is actually squirrel voice. -.- And Junichi looks very "harm sup" (lecherous) just like his anime voice, but his face is unattractive and he doesn't sound anything like his cool anime characters. His natural speaking voice is just a normal voice, which means his sexy voice is artificially done when he turns it on. I'm rather disappointed with both here.

-------
Amatsuki. A 2008 anime that I dug up based on searching for anime voiced by Junichi Suwabe. Just went to his anime news network bio and picked the 2nd of the list he did.

Hanasakeru Seishounen. Pretty good. At first, it seemed slow-moving and at 39 episodes, seemed pretty long. But I've watched till ep 4 and want to keep on clicking for another, so that's good. Handsome men ^___^

As I noted, older anime tended to have many episodes compared to now (only 13). Older anime, simpler drawings, cheaper to produce more, I'm guessing.

I love Mustafa. ^___^ So hot and sexy. At first, didn't think he was that handsome. His eyes droopy. But later, he just got sexier and more and more handsome!! ARGGHHHHHHhh... >.< I choke on the excitement when I see him. That's how handsome he got at the end.

I can't believe Rio Satomi's seiyuu is the voice of Penguin in Polar Bear cafe. O.O How can such a sexily, pleasant Rio Satomi's voice become so high-pitched, scratchy Penguin???

Those who know how to see the answers in the post, will see. Those who don't, won't.

Update Mar 28 12:55 a.m.: Didn't like the ending. I'm with Hitomi. Irritating that the other code breakers kept siding with the bad Prime Minister and their stupid "code breaker" idea.

Hitomi died to save worthless people, thinking they would be appreciative.

Didn't really like the boys zapping fighting throughout the anime as well. Felt more like a kid's show. And all that justice crap didn't hold well.

Too bad Kenjiro Tsuda's voice didn't get much showing here. And a pity Miki Shinichiro's voice didn't get full display as he did in Hakuouki. In Hakuouki, his voice was perfect for Hijikata. His tone of voice -- cool, laid back and yet... disturbed by his own caring.

Code Breaker is like the new anime these days, 13 episodes only.

Starts out a little loose, takes a little patience to stay with it, but still interesting overall. Many nice male seiyuus there.

I actually tried watching once after seeing it in the list of new anime, but left it after a few minutes into the starting. Futuristic Americanized setting that I'm not into.

After I finished Vampire Knight and looked up Kiryuu's seiyuu in Anime News Network, I found him in K.

Decision to watch it was sealed when saw that my fav seiyuu Sho Hayami is also in it!!!

I went back to K and watching it past the starting.

The beginning was a little hard to stay with, took some patience as the story unfolded.

I thought Sho Hayami would be a character there, but he's actually literally, just a voice in a recorder that appears only a few times. T.T I fell in love with him as Muraki in Descendents of Darkness.

Overall, the idea of K is interesting, and leaves one guessing till the surprise explanation towards the end. So, that's pretty good.

But the ending could be better. I like Mikoto (and the seiyuu Kenjiro Tsuda ^_^) but they could've done better with following up with what happened to the Silver King Isano Yashiro, although we can guess pretty well (returned to his body).

Only 13 episodes. It seems these days the creators/producers are keeping episodes at 13 for the new anime?

And what did the Red King say to the Blue King just before he died?

The voice of the heroine is quite annoying soft and weak.

I checked Anime News Network, no famous seiyuu here either, except Akira Ishida. Waiting to hear his voice, coz I'm still at the start of Ep 1 on Youtube.

The reviewer who listed it in the 2013 winter anime, said it appears much more interesting than Arcana Famiglia. So I checked out Amnesia Ep 1.

In Hakkenden, Shino killed that sad golden-eyed woman who was tricked into becoming a demon. Surely, she could have been saved/helped?

In Code Breaker, they made Hitomi die for nothing for some misguided notion of justice that made his comrades refuse to support him and side the wrong side.

In this last episode of Amnesia, in exchange for her memories, that girl gives up remembering Orion. Why give up someone she cares about for something she don't even remember?

Memories can be rebuilt with the man she loves. But Orion cannot be remembered any more if she chooses to get her memories back.

What is lost is unknown. What is known, is now. Whatever feelings and memories of the past she had, why get them back at the expense of losing Orion?

I don't know what I lost. But I know at this moment, what I have, what I treasure. And this is what I want to keep. If I were her, I would just let the past go, keep Orion with me, and rebuilt the relationship with the man I love (if possible and see how it goes).

I'm sure she would be able to love Ukyo again. And it's not like she doesn't know him at all. She is already acquainted with him. So, it's just a matter of time needed to rebuilt the relationship they had.

To lose Orion, is to lose an ally. Someone who has helped her secretly, who understands her, whom she can confide in, who watches over her. He is like her mind speaking to her. A part of her, like a soul.

How can she just walk out on him?

Sun Mar 10 11:07 p.m.: Kamisama Hajimemashita. 13 episodes only. Very nice. It's one of those anime that I wish would have a few more episodes or last a long time. ^_^
Had a craving for Shoujo anime after Arcana Famiglia. Googled for shoujo titles. Saw this title on a blogger's 2012 Shoujo anime list and checked it out. Watched on Youtube and Animecrazy. I love that fox. Love him even more when he became little cutie fox!!!
The opening song is very refreshingly catchy and cute.
Right away, I spotted Akira Ishida's voice for Mikage. His voice always has this very uniquely sad, frail and long-suffering tone. None of the usual famous seiyuus are in this anime.
Tomoe is voiced by the guy who voiced Soma in Black Butler (checked it out at Anime News Network). http://www.youtube.com/watch?v=PZtrQPFklf0

Arcana Famiglia on Youtube. Confusing but interesting. I'm sure I started on Ep 1 but how come it's like I'm watching from the middle?

The handsome men sure are keeping me on. ^__^

I love the sexiest, supposedly-bad guy there. Jolly. Looks a lot like Hakuron from Haou Airen manga. Jet black hair and his sunglasses. What a man. Too bad about his voice, too low, doesn't suit him. It's actually voiced by the same seiyuu who voiced the higher pitched Lau in Black Butler. Can't believe it's the same seiyuu.

The seiyuu who voiced Grell in Black Butler is also in there as Liberta. Again, amazing that Grell and Liberta are voiced by the same person.